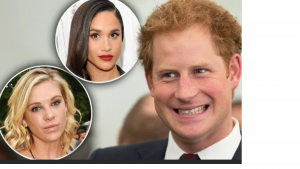 OBVI Meghan’s Not Going to His EX’s Wedding!

In what world are we to assume Meghan Markle should be sucked into a black hole of EX-awkwardness which young royal men indulge in? In Meghan's universe of emotional independence, clinging to the past stops with estranged dads and ex lovers. And you know what, she's got a point. But at the same time, there's more to these ex relationships than meets the eye, with respect to the two most famous princes and children of the late Princess Di.

Let's momentarily suspend drastic judgments in favor of thoughtful analysis. It's not that hard to understand how two boys, who lost their mom at an earlier age than is fair, would attach themselves to women who morphed into emotional anchors. The relationships may not have advanced all the way through, but this doesn't cancel out the time, experience, and emotional investment which they can't simply find the heart to toss aside. With the most prominent female lodestar ripped away, these attachments do matter. The women know them well. They more than likely know some of their secrets and, on some level, have filled some of the vacuum. This is not to say these exes served as maternal replacements. But the lines were likely blurred on occasion, because that's just what happens when you are emotionally connected to someone while devoid of the luxury of turning to mom for that much needed heart to heart.

Meghan, for her part, is quite the opposite it seems. The former Suits star conveys an aura of emotional independence. She's shunned her exes. And when her dad wouldn't heed her call to follow in step with protocol, she tossed that relationship into the the rubbish pile as well. The Duchess of Sussex's ability to travel forward without the aid of emotional crutches shouldn't be confused with what some may interpret as being cold hearted. Her ability to live unencumbered, by the psychological chains of relationships that have run their course, is more an adaptive trait than a dehumanizing carelessness. On the contrary, she cares deeply about her own well being and that of her close family and confidants. She has remained true to her loyal friends. Perhaps this “way about her” ingratiated her to the Queen, whom herself is quite obviously no sap.

These differences between Meghan and Harry aren't a question of right or wrong. Nor is any of this about morality. It's not even about preferences or fancies. It has everything to do with our needs and the events in our lives that define us. Prince Harry feels a connection to this very part of his life which formed in the context of a tragic void. If that connection is meaningful enough, that he genuinely feels compelled to attend ex Cressida Bonass' nuptials, then we ought to respect that. At the same time, we can respect Meghan's decision to stay home should that come to be the case. She owes Harry a commitment at home and to family. She does NOT owe it to him to serve as chaperone to his past.

EXaholics.com is an online recovery platform for those who have difficulty recovering from a previous romantic relationship.