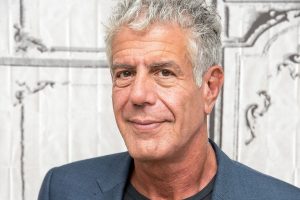 Was Anthony Bourdain Obsessively In Love?

Friend: "Like He Was Crazy in Love With Her, Crazy Being the Operative Word"

The recent and tragic death of beloved American cultural and culinary explorer Anthony Bourdain left many searching for answers to why such a successful icon would choose to take his own life.

Just this week PEOPLE magazine reported that a friend of Bourdain's, who had recently spent time with him, claimed the famed chef was "madly in love with Asia," a reference to Italian girlfriend Asia Argento. "Like a teenage boy just absolutely lovestruck," the friend went on to say. "Like, he was crazy in love with her, crazy being the keyword."

This concern from friends, coupled with recently surfaced photographs of Ms. Argento and a French journalist possibly displaying signs of affection, could be giving us some clues. There were additional turns, like a cryptic tweet posted by Argento before reports of Mr. Bourdain's death and deleted shortly thereafter. And around the time of this writing, Argento quoted a breakup song by a singer who had also committed suicide.

But let it be known that, while these reports give us some context, none should give anyone reason to lay any blame towards Ms. Argento. It would be grossly irresponsible and unfair to her.

We may never know for sure what actually drove Anthony Bourdain to suicide. Whatever may have tormented him in his final hours still remains a mystery. Yet the idea that someone could be so lovestruck to the point of concern to close friends and family, is not a new psychologically relevant concept.

So let's take a look at what we know about loving too much or obsessive love in the general population. A better understanding may even help save someone you know or even yourself, if you feel you may be loving obsessively.

We do generally know that when one partner in a relationship becomes too dependent on receiving an unattainable level of love and attention, the relationship is perhaps likelier than not to ultimately fail - leaving the obsessed partner devastated.

Obsessive romantic love can affect anyone (of age to love romantically) and there can be a range of contributing factors. Attachment theory, addiction, and brain chemistry are just a few areas of useful study. Studies have shown that love itself is a powerful drug akin to heroin in its effect on the brain.

It is also logical that many successful individuals would have tendencies towards obsession as they have properly channeled their obsessive energy and determination in their career. It hard to achieve great success in anything without a twinge of an obsessive quality. But coping with loss is another thing altogether. Success doesn't make the coping process any easier. Obsession, meanwhile, makes it much harder.

There have been clear patterns following disputes in, or dissolution of, obsessive romantic relationships. When love becomes like an addiction, the obsession keeps us intoxicated. The obsession is what fills us up, making us feel compelling, vigorous, and essential.

Love obsession can fill a certain emptiness in our lives even if our lives themselves were not empty. And also like an addiction over time, love obsession destabilizes us as it becomes increasingly exaggerated. If the obsession becomes all consuming and then the object of the obsession is taken away, a delusion is created comprising the belief that all hope for happiness is lost. Permanently.

[Can't get over your EX? You may be an EXaholic. Sign up here ]

*Obsessive Love is Based On a Deception

For those that struggle with obsession and the hopeless feeling that love and happiness--"like this"--will never find them again, remember that this belief is a deception. Recognizing that this delusion is not reality is the first step. Then healing time is required to let your emotions catch up with your thoughts. Do not try to take on the goal of completely extinguishing your obsession, but rather to manage it over time.

Taming an obsession happens gradually, with conscious effort and support. Distraction, accomplishment, caring for others, physical activity, and spending time with people who understand you are effective coping techniques to eventually suffocate obsession. Always seek professional support from a licensed therapist and build your community of support with resources such as exaholics.com, coda.org, slaa.org

Dr. Jacqueline Duke is a Clinical Psychologist and featured expert on EXaholics.com.